Yet another entry on the project about traffic prediction (online here: http://fergonco.org/border-rampage/).

In the previous post I showed how the data was analyzed and the forecasts produced. In this one I will show how the map shows all this information. This is the last of the three processes of the data flow diagram, the one in green: 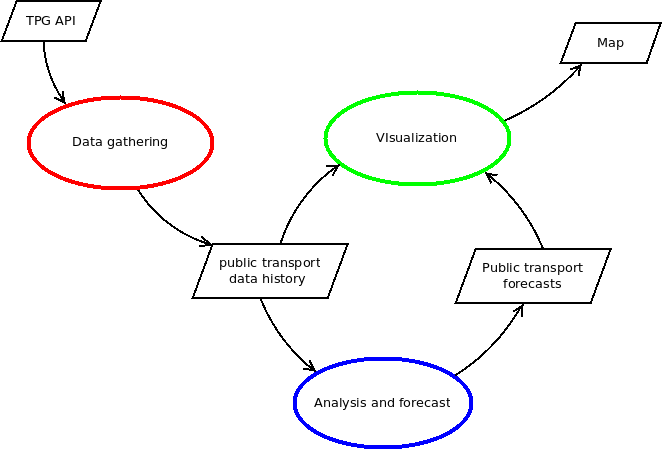 In order to draw gathered and forecast data they have to be unified in a single dataset that the mapping software, GeoServer, can process. For gathered data this involves some transformation, which was done with SQL views. In the case of forecast data, it does not require any transformation but it has to be generated regularly. The next points will show:

I will start by recalling quickly how the public transport network is stored in the database. For brevity, some details are omitted. Refer to the previous blog post to see the complete explanation.

There is have a table with segments, OSMSegment, which contains the segments that are part of the public transport network:

This OSMSegments are referenced by records in TPGStopRoute, which contains an entry for each pair of consecutive stops of a service line and references the OSMSegments that compose the route between these two stops.

Finally, the data gathered is stored in the Shift table, that contains the time elapsed between stops and the reference to the TPGStopRoute.

Now, how should the data be in order to be drawn from GeoServer?

The aim is to have a map showing segments of the public transport network painted with a color depending on the speed of the last vehicle passage. And this for several time coordinates (instants) that the user can select on the web application. In order to fulfill these requirements, GeoServer needs a dataset with the following fields:

I had to make some critical decisions here: what are the time coordinates I want to offer the user? Do I want to let him navigate several months of data history? Additionally, what would be the resolution of the time dimension? Each time a bus arrived to a stop? Each quarter of hour? These questions (time dimension range and resolution) are critical because with the amount of data involved they can greatly complicate the implementation. The very conservative decision I made was: each quarter of hour for the last 24 hours.

I have shown how the database is organized and how the data must be in order to be consumed by GeoServer. Now I will explain how the transformation was done by means of SQL views.

A first view joins Shift, TPGStopRoute and OSMSegment in order to get speeds and geometries on the same table. This yields a result where each Shift is replicated as many times as there are segments in the associated TPGStopRoute, each of this replicas having a different segment geometry. I called this a GeoShift.

Then, another view has the timestamps that correspond to “the last 24 hours each quarter of hour” whenever it is computed.

Note that the timestamps view would run outdated as times goes by so there is a process in the server that refreshes the views.

This implementation faces some performance limitations:

As gathered data, forecast data is generated for each quarter of hour for the next 24 hours.

The table where forecasts are stored has already the structure required by GeoServer: a geometric field, speed and a timestamp.

The process of populating the forecast table is like this:

Finally, in order to get a unique dataset, a view performs a SQL union between the tables containing the gathered data and the forecast data.

This result can be loaded in GeoServer. The only two special configurations it requires are:

Note the use of PerpendicularOffset to symbolize the line on one side of the geometry, allowing thus to differentiate both segment directions.

… and here you have an image of the result. 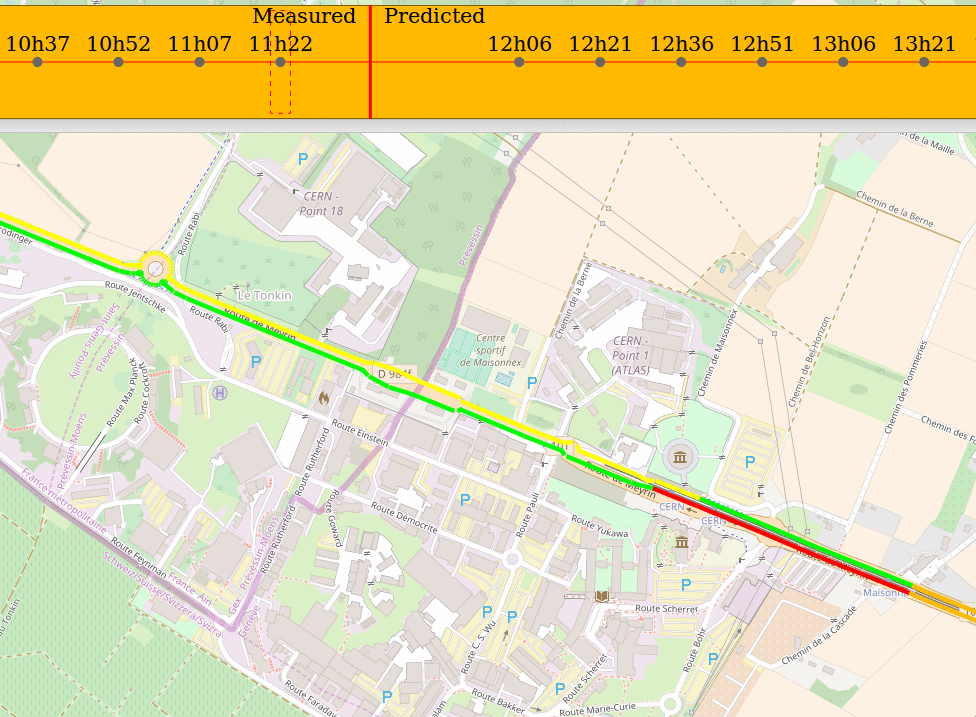